How to choose a suitable small flour powder filling machine?

How to choose a suitable small flour powder filling machine?

1. The demand for special flour and small-package flour continues to increase

Wheat is the most widely distributed and largest food crop in the world. At present, the main wheat-producing areas are still concentrated in Asia, with China and India as the main producing areas, followed by the European region, which also accounts for a large proportion of global wheat production. Most of the wheat is used for food, and a small part is used for industrial consumption and feed consumption. Therefore, wheat plays an important role in global food production, trade, and even food security issues. 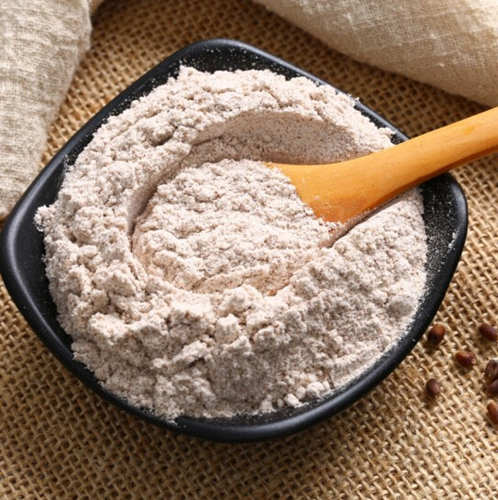 At present, among all the types of flour, the nutritional value of whole wheat flour is the highest in comparison, but in the past, because of the rough taste of whole wheat flour, most people didn’t like it very much. In recent years, because of its relatively high nutritional value, it can bring various nutrients to people and make people healthier, so they have gradually come into people’s field of vision.

The vitamin content in whole wheat flour is also very high. In addition, its trace elements such as calcium, iron, and zinc are also favored by many people. It can be said that whole wheat flour is the flour with the highest nutritional value among several common flours in the market.

The flour processing industry is an intermediate link in the flour industry chain, there is a great demand for special flour and rapid development. Through reasonable flour production and processing technology, the flour can achieve certain physical, chemical, and grain biochemical characteristics, and provide multi-purpose types of flour for downstream different pasta food processing industries (such as baking, instant noodles, udon noodles, and pasta production).

Although the global demand and consumption of flour are relatively stable, with the continuous upgrading of the consumption structure, especially the penetration of small-package flour into the household market, the retail attribute of flour has been strengthened day by day. In the future, it is foreseeable that more flour production companies will withdraw from specialized, high-end flour products that meet retail demand.

(1). The manual flour packing machine is low in cost, but can fill the most packing specifications. Some models of manual powder filling machines have no restrictions on packaging methods. One machine can pack pre-made pouches, bottles, cans, etc.

(3). Flour manufacturers usually produce multiple types of flour, such as wheat flour, multi-grain flour, soy flour, etc. When changing the type of flour, the filling machine needs to be cleaned. Because the semi-automatic flour packaging machine has a small body and a simple structure, it is easier to clean than a fully automatic powder packaging machine.

3. What are the classifications of small manual flour powder filler machines?

4. How to choose a suitable small flour packaging machine?

(1). Determine the configuration of the machine according to the characteristics of the powder material.

The flour workshop is easy to produce dust during the production, and the generation of dust is accompanied by the entire processing process. If the dust is not controlled and allowed to fly freely, it will not only pollute the workshop and the surrounding environment, and endanger human health, but also be prone to explosion fire accidents and cause irreparable losses. Therefore, when purchasing a flour filling machine, we must first consider the dust-proof configuration of the packaging machine.

Our small manual flour filling machine is equipped with a double dust-proof design. First of all, there is an exhaust port at the upper end of the silo cover, which can prevent flour powder dust from leaking out and can also play a role in exhausting air.

The silo of the semi-automatic powder filling machine is filled with powder. When the materials are stirred, air will be generated and accumulated to a certain extent, the air pressure in the hopper is inconsistent with the air pressure outside the silo, which will affect the filling accuracy and filling speed. We add a dustproof cloth cover at the connection part of the screw conveyor and the manual powder filling machine, which plays the dual role of dust prevention and exhaust. 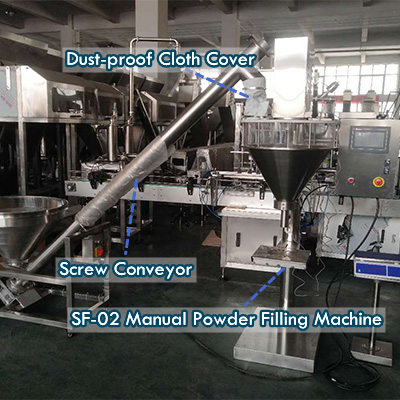 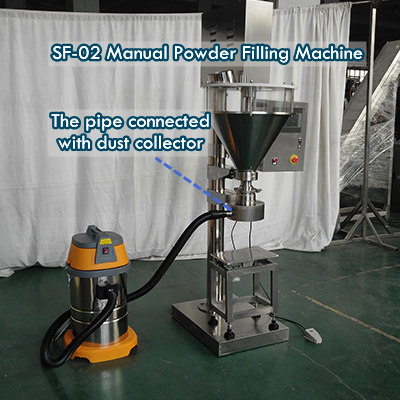 Secondly, dust will also appear when the flour is unloaded from the hopper. Our small manual flour powder packing machine is equipped with a dust-proof pipe at the discharge port, the pipe is used for connecting with the dust collector.

(2). Choose the machine model according to the type of product packaging. You need a machine that can only fill bags or can fill all kinds of bottles, cans, and bags.